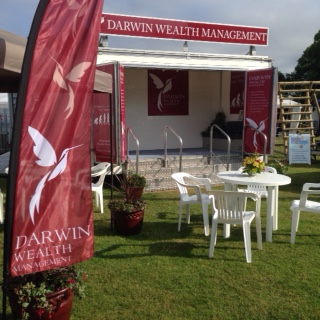 Darwin Wealth Management Ltd, would like to thank Newport Show and their event organisers for a wonderful day last Saturday .  An extract from the Shropshire Star is as follows:-

The event, regarded as one of the top one-day events of its kind in the Midlands, took place for the 106th time on Saturday.

Despite not yet revealing final numbers, organisers hope the crowds in the picturesque Chetwynd Deer Park topped last year’s 13,000 after noticing a big surge in ticket sales

The show, which is organised by the Newport and District Agricultural Society, featured motorcycle stunts, numerous stalls, vintage tractors, horticulture, craft, a schools marquee, a dog show and massive horse and livestock competition.

Speaking at the show on Saturday Andy Craddock, show president, said: “We are hoping for a bumper year. It’s a really sunny day which will hopefully bring the crowds out.

“I think one of the reasons why the show remains popular is that it has remained focused on the agricultural side of things, but we have blended in new areas as well like the food court and schools’ area.

“Fortunately several of our livestock exhibitors are TB-free this year and I am pleased to see them here today. Hopefully that will last as long as possible. It’s nice to see what people make of the show at the end of the day.”

Martin Hall, vice-president, who has been involved in the show for about 10 years, said: “It’s a traditional show and there are a lot of interesting things about it. I think we have things here that you don’t see at other shows.”

Mr Hall, who is also livestock secretary, said there had been an increase in native breeds of animals this year.

“In terms of livestock, we have had more exhibitors this year. Cattle is about 20 per cent up and sheep is up as well but by not as much,” he said.

“Normally we have lost a number of exhibitors because of TB but this year we have only lost one I can think of.”

Mr Hall is due to become the president of the society in September.

He said: “I am looking forward to it. My background is in farming. I get an enjoyment about being involved in the show and I still have a connection with farming.

“I have no plans to change it. Why change it if it’s not broken? The only thing I have got is a couple of ideas about changes with the society.”

the society save on postage costs – all money we can plough back into the show.”

She said they had also gained many new fans on social media.

deal of excitement, especially among the younger generation looking forward to meeting up with friends and enjoying the attractions.” Foodies were also well catered for at the event with a wide range of regional delicacies and cookery displays by TV chef Paul Rankin. The chef entertained with two cookery demonstrations in the food court.

Children were also given the chance to meet him in the schools marquee during “kids can cook” workshops.

Mr Rankin said it was his first time at the Newport Show.

“As soon as I came in there was a real good energy about the place. You could feel it,” he said.

“I could tell it was going to be a proper community show. You can sense it from the exhibitors, farmers and visitors.”

Mr Rankin added: “I do a lot of shows like this and I enjoy them because I love the outdoors.

“I’m known for certain dishes but I haven’t really got a signature dish. I get bored with dishes and move on.”

One visitor to the show was mother-of-six, Crystal Urquhart, of Wem, who attended with her family.

She said: “We go to a lot of shows but this is our first time here.

“We like it and the children get a lot of enjoyment out of it.

“They like to see the animals and they are into their tractors and diggers.”

Another visitor was Susan Hart, from Dawley in Telford.

“This is about my fifth time here and I love it,” she said. “It is so well organised and the setting is lovely.

“There is so much to do, whether you are young or old, and it seems to get better every year.”

Air cadets from Shropshire and Staffordshire helped manage traffic as part of an army of volunteers who support the show each year.